On my Traction Avant, I mounted a Clayton cabin heater that also has an adaptation for an external hose.

The hose I connected to the cabin heater is routed from the heater to my front window, just aside the cockpit.

This construction keeps my front window from freezing and other humid problems. 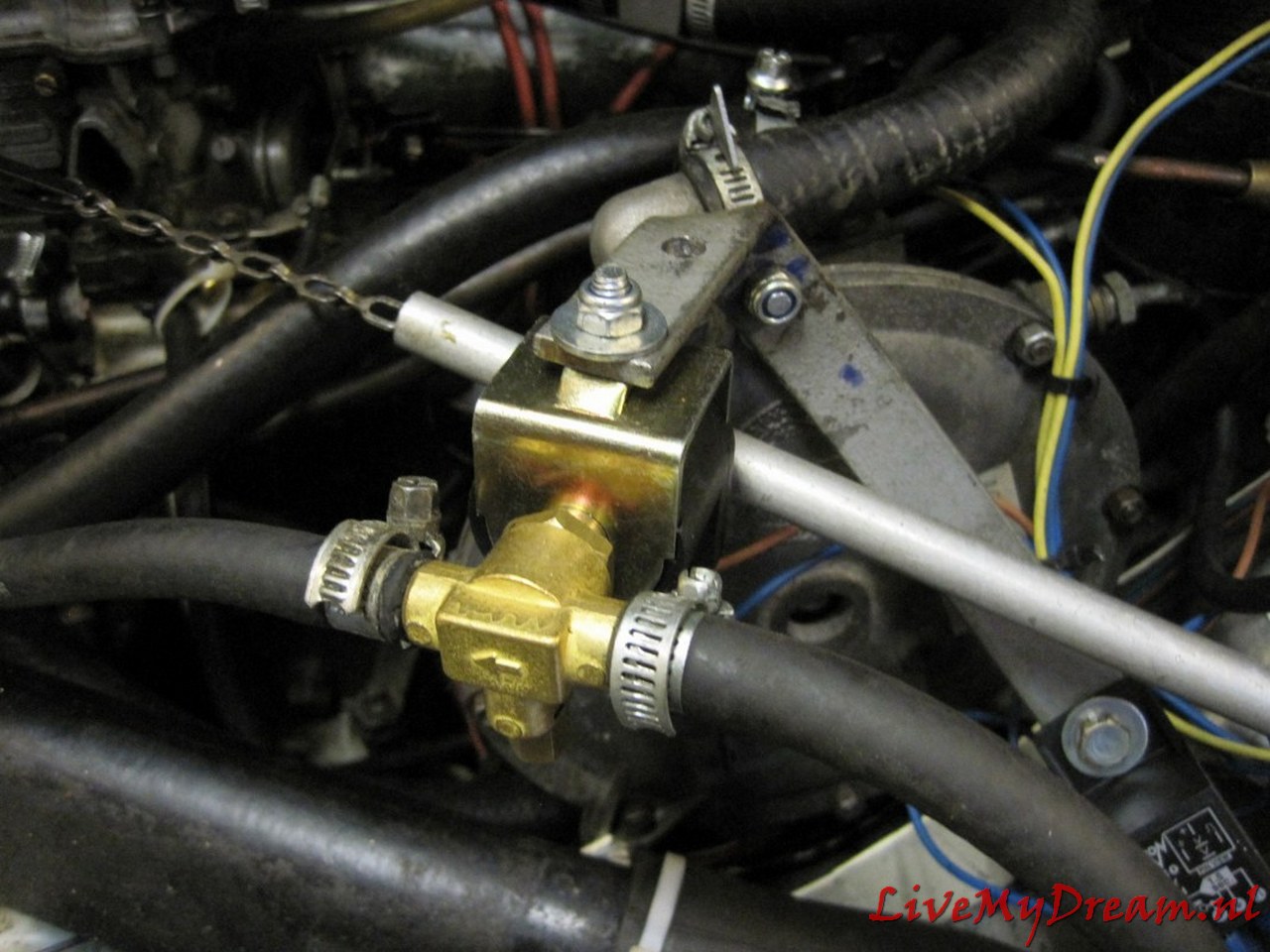 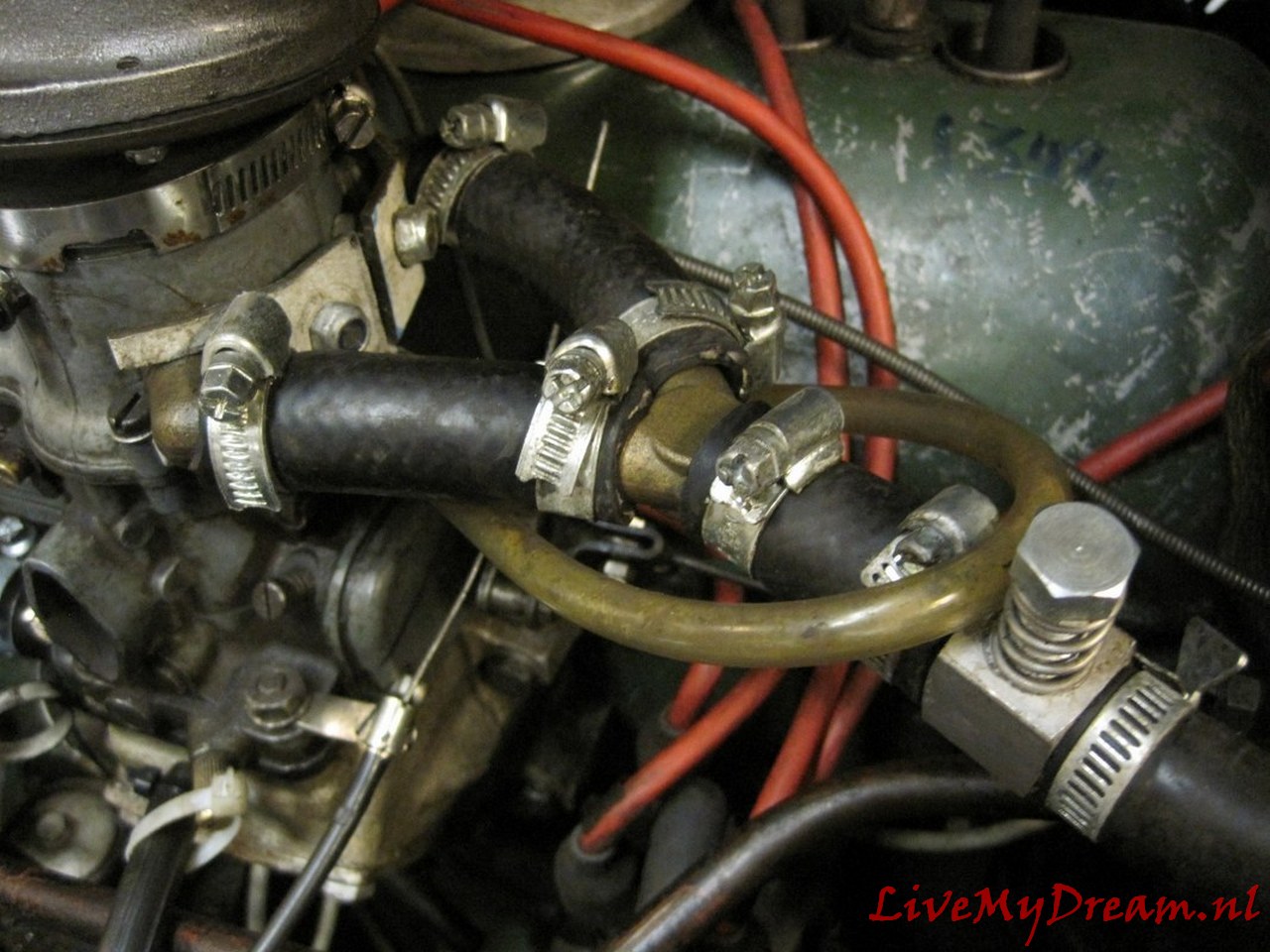 Really crappy, I don’t have another word for it: The old contact point ignition with its coil. I tried 3 of them on 6 volts and the combination of 6 volt battery, starter motor and points always gave me trouble, both with cold and hot starts. So I installed an electronic one, and NO 123 ignition. Just an English ignition, specially for 6 Volts OR 12 Volts. First installed with the 6 Volt installation and it worked perfectly. Still does, but now on 12 Volts.

First, the original shafts were overhauled, but when the 4-speed gearbox got installed, double homokinetic drive shafts were installed at the same time!

Above: At the time of purchase, Below: At the MOT inspection

Above: After replacing the old driveshafts with the driveshafts fitted with dual homokinetic joints

Assembly of the new axles whereby really everything has to be loosened….

Above the old axle

The Traction Avant is regularly parked at our place for long periods of time.

Each time, the level of my brake fluid when I picked up the car was at minimum, while I had put the car away with maximum level.

The reason turned out to be that on almost all parts where the original meager mineral brake fluid could flow under gravity along a brake cup, it actually did.

The result was a lot of filth and an empty reservoir.

The residual pressure that keeps the rubbers sealing nicely, drops off after a certain time and then this above mentioned problem arises.

The solution turned out to be upgrading to DOT3 brake fluid. DOT 3 has somewhat lubricating properties which in my experience keeps the seal between cylinder walls and brake cups closed.

I’ve been using it this way since 2015 and haven’t lost a drop of DOT3 since.

An additional advantage is that because of the lubricating effect the brake pistons no longer get stuck as a result of the long downtime during the winter, in combination with the hygroscopic effect of the old brake fluid.

Then fill up with DOT3 and do some serious bleeding.

DOT 4 is not a good idea in any case, at least not with the original rubbers.

The additives in DOT4 cause the original rubbers to swell. If you want to use DOT4 or any other DOT version than DOT3, replace all rubbers and cups of the wheel brake and master cylinder with after market (so do NOT use old stock) rubbers and cups.

Update 3-2021: Everything is still fine with the brakes, I did remove the front brake cylinders as a precaution, cleaned them completely, flushed them out and filled them again with new DOT3.

Sometime around 2006/2007 I initially fitted the Traction Avant with a CTA 6 volt alternator.

Above you see the CTA kit that I originally used to convert the 6 Volt system from DC to AC. You can also see the alternator from CTA installed at the time, the bracket from CTA never really worked well and seemed to be on the weak side.

Shortly after that I converted the car to 12 Volts.

I then replaced the regulator from the 6Volt type to a 12 Volt separate regulator.

While a full battery when charged is at about 13.4 Volts.

After a lot of research and searching, I put a fixed regulator on the alternator, but that didn’t help either.

Now it seems that the field winding just can’t handle more because this alternator is wound for 6 Volts.

Seems strange to me, if you turn faster you get more voltage according to the Faraday book, but there also seems to be a saturation of the ironwork.

Later again, I converted the Traction to a 4-speed, with an ID19P engine and corresponding drive pulley for the water pump and alternator.

So in the end I just bought a new 12 (14) Volt alternator from ISKRA, actually a Mahle one.

It still needed some modifications, of course a new bracket…

And the pulley had to be moved a little on the shaft.

I moved the big ring on the outside to the inside, behind the pulley and with that the offset was sufficient.

I found the bracket of the CTA set-up too weak, I had already replaced it for a sturdier home-made type.

The ISKRA alternator fits exactly in this bracket and further connection is no problem at all.

I have already converted my pulleys to thin belt dimensions of 10 mm because I was stuck to the pulley of the ID19P, which I wanted to keep because it is a bit larger than that of the original Traction Avant. This makes the water pump run just 5% faster and that seemed a good idea in connection with possible extra heat development from the ID19P engine, it was of course also the original pulley from that type of engine and it all just fitted with the engine mounting in the Traction Avant…

It remains to be seen, because the water pump of the TA is slightly different than that of the iD19P. It all works fine though.

The new alternator also works perfectly and charges the battery at 13.4 Volts.

In the end I did some calculations on the RPM’s you need to get a good charge.

From the graphs of this ISKRA alternator you can see that it only does something above 1200 RPM up to 7500 RPM.

The camshaft turns half the speed of the crankshaft so 325-1900 RPM.

The camshaft pulley of the ID19P is 21cm in diameter and that of the Dynamo is 7cm in diameter, this gives an acceleration of exactly 3x.

The shaft rotation speed of the dynamo is therefore between 975 and 4700 RPM. That’s too little to charge anything at idle.

The pulley of an old DS20 alternator was turned from double pulley to single pulley by me earlier and was mounted on the CTA 6V alternator, see the photo higher in this article. This one has a diameter of 6cm.  The acceleration from crankshaft pulley to dynamo is then 21/6=3.5x.

See below an action picture of the moving fan and pulley c.q. belt….